This week­end is the 3rd May­mont X‑Country Fes­ti­val I’ve ran in; in as many years. 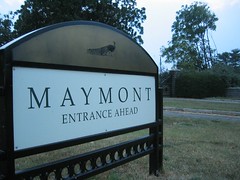 This week­end is the 3rd May­mont X‑Country Fes­ti­val I’ve ran in; in as many years. The pre­vi­ous two (results on my run­ning page), Angela and I both ran the cross-coun­try 5k. May­mont is an incred­i­ble park and it is so much fun to run a race there. How­ev­er, there always seems to be some­thing wrong each year. The first year, the 5k was divid­ed up by sex/age group­ings (which isn’t nor­mal for a 5k, in my expe­ri­ence). Our groups were both on Fri­day night, with Ange­la’s start­ing last at 6:30. Of course, she fin­ished in pitch black dark­ness, but she did fin­ish. Last year, we ran on Sat­ur­day morn­ing but the clock got messed up on the men’s 5k (I don’t think I set a PR by near­ly three min­utes on that course).

This year, I ran the new 8k course, which was on Fri­day at 5:30. Of course, I’m usu­al­ly at work on Fri­day at 5:30, but I made an excep­tion today. How­ev­er, I was still run­ning late to the park and was quite lit­er­al­ly still get­ting my num­ber pinned on as the start­ing gun sound­ed. This feel­ing of being rushed cou­pled with being bad­ly dehy­drat­ed (I had been sweat­ing it out on a job site ear­li­er that day) led to a less than opti­mum­ly pleas­ant run in the heat of the set­ting sun. All the same, as I said, May­mont is a beau­ti­ful park and the race was lots of fun. I’m sure I’ll be back next year. There’s a half-marathon as well I’m hop­ing to try.

Also on the sub­ject of run­ning, today marked the last time I’m run­ning in my cur­rent pair of sneak­ers. They are start­ing to both look and smell like all of the 400 miles on them, so they are being retired to gar­den­ing duty. I have a nice new shiny green & white pair wait­ing for me in the clos­et.