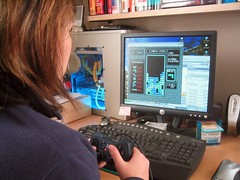 Angela play­ing a game of Tetris on the NES emu­la­tor.

Angela and I have been spend­ing a lot of our time off this hol­i­day play­ing some clas­sic 8‑bit games on a NES emu­la­tor on my PC. Games like Leg­end of Zel­da, Super Mario Bro.s 1, 2, & 3, as well as Tetris and Dr. Mario.1 We’ve both been amazed at how much fun it has been to go back and play all the games we loved as kids.

It has occurred to me, that our gen­er­a­tion seems to have an ear­ly sense of nos­tal­gia. We haven’t wait­ed until we were in our 40’s or 50’s (or even lat­er) to decid­ed we want­ed to have bits of our youth around. Pop cul­ture ref­er­ences are woven in our music and movies. Speak­ing of 8‑bit gam­ing, I’ve lis­tened to prob­a­bly ten dif­fer­ent ren­di­tions of the Super Mario Bro.s theme as per­formed by var­i­ous musi­cians online (from gui­tar and bass solos to a capel­la groups to orches­tras, with some being bet­ter than oth­ers). Also, I see Auto­bot and Decep­ti­con stick­ers on auto­mo­biles2 (along with oth­er ref­er­ences, like Thun­der­cats, which just don’t quite make as much sense). Fox’s “The Fam­i­ly Guy” has at least five min­utes of 80’s youth pop cul­ture ref­er­ences each week (this past week with Stewie as the pin­ball in the Elec­tric Com­pa­ny’s count ani­ma­tion has to have been the best yet, top­ping even the Kool-Aid man bit in the court­room for us).

I sup­pose it’s all some prod­uct of the fact that it was my gen­er­a­tion (more-or-less) that was respon­si­ble for the inter­net being what it is today and allow­ing access to every­thing, any­time we like. Nat­u­ral­ly some of our youth found its way on there ear­ly on. Any­way, it seems to me that Gen­er­a­tion X (or what­ev­er the hell they call us these days) has decid­ed to stay young a lit­tle ear­li­er in life. In healthy dos­es, I think it’s incred­i­bly cool. It’s not that I don’t want to grow and evolve as a per­son, it’s just that I don’t wan­na grow up ’cause I’m a Toys’R Us kid. Maybe it can help us remind us of when our lives were sim­pler and we were all young ide­al­ist. We want­ed to do what was right; whether it be help old lady’s across the street or fight Cobra. I know some­times I find myself act­ing more like some shal­low 80’s yup­pie than any­one I would have actu­al­ly liked when I was eleven years old. Maybe in think­ing about what I did for fun back then I’ll have to keep that in mind as well.