Why am I so addict­ed to this pro­gram? It’s just cat­a­logue­ing the stuff I already own! Nev­er-the-less, I can’t stop scan­ning stuff. I had to fight the urge to pur­chase the Blue­tooth bar­code scan­ner when I bought a license for the software.

First of all, it’s sim­ply gor­geous soft­ware. Note how the cov­er image is slight­ly altered between hard­backs and soft-cov­ers to give the impres­sion of book-bind­ing. Also, the sub­tle shad­ing effects are nice. I don’t like how albums and some games are giv­en a CD jew­el case image (not shown here), but that’s for­giv­able (and change-able; see below). 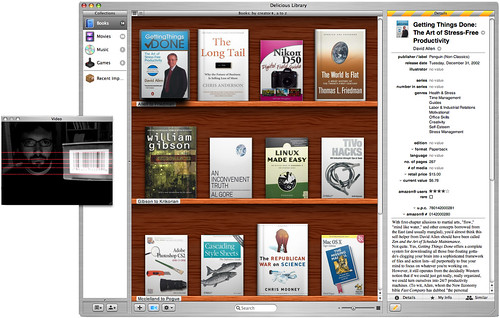 Screen­shot of Deli­cious Library and the iSight bar­code read­er screen (which can be turned off to reduce your creeped-out level).

Now, I do have a cou­ple of com­plaints about DL. First, the iSight scan­ner isn’t per­fect on my iMac. Now, that’s prob­a­bly not Deli­cious Mon­ster’s fault, since they did­n’t design the hard­ware. Still I find myself key­ing in about one out of every four ISBNs.

That brings me to some­thing that is with­in DM’s con­trol, though: the place­ment of the ‘Add a new item’ but­ton with respect to the search fields. They’re all the way across the win­dow. Now, I’m not try­ing to be super lazy or any­thing, but if you’re going to make me click then key, put the fields close to one anoth­er! It’s not as thought it would upset the aes­thet­ic of the win­dow or any­thing (and DL isn’t as bad an offend­er on this as say, Quicken).

Last­ly, some items don’t have images in the Ama­zon data­base and we all know this. DL dis­plays a kind of paper-wrapped box as a default image (far from the most unat­trac­tive default). How­ev­er, there’s a very sim­ple work-around: take advan­tage the user-sup­plied images that Ama­zon hosts. I attempt­ed a scan of one of my BBC Pal discs (“Monarch of the Glen â€“ Series 1″), and while it’s there on Ama­zon, it does­n’t show up in DL. This would be, in my opin­ion, a great way for DL to let it’s users fill in the gap for both them as well as Amazon.com. So far, noth­ing, though. Of course, it’s sim­ple enough to drag an image right into DL on your item once you’ve gone to the trou­ble of scan­ning it in. How­ev­er, this is a less than per­fect becuase my work only ben­e­fits me and I can’t ben­e­fit from the work of oth­ers. Come one peo­ple, it’s Web 2.0 time, here!

It’s a real­ly straight-for­ward peice of soft­ware. It allows you to keep track of any item you loan to a friend (or any­one in your Address Book; friend, fam­i­ly, or foe). Oth­er than that, it real­ly does­n’t do any­thing. It’s not like you can watch a movie or lis­ten to an album in this soft­ware; just note that yes, you do own it. Per­haps it’s my innate OCD ten­dan­cies, but I just can’t get enough of that, though.