One thing that has real­ly amazed me about work­ing at Bent­ley is just how spread out my com­pa­ny is. Not just in terms of branch offices, but even the var­i­ous staff mem­bers that make up a sin­gle team are spread in dif­fer­ent cities, even coun­tries and con­ti­nents. Short­ly after my first con­fer­ence call between myself, the West Coast of the U.S. and the East Coast of India; I real­ized that being able to quick­ly know the time in dif­fer­ent time zones was going to be a good idea.

Of course, the first thing I think of is those wall clocks over a 60’s news anchor’s shoul­der labeled: New York, Los Ange­les, Lon­don, etc. I thought: I won­der if there’s a desk-sized ver­sion of such a thing? Well, there is and to make a long sto­ry short: they’re all very expen­sive. So I fig­ured I’d get crafty and make my own time zone wall clock array. 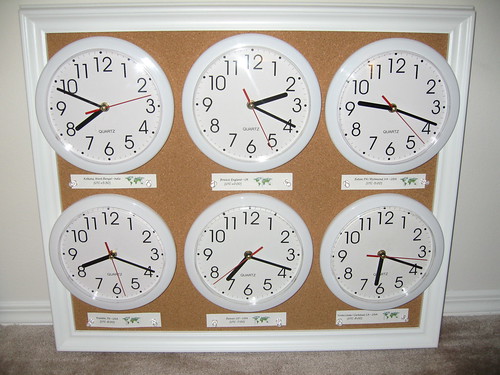 There’s absolute­ly noth­ing fan­cy about this. I found some 8″, white plas­tic wall clocks at Office Depot for about $4 each. I’m pret­ty sure the clerk thought I was crazy when I bought the entire stock of six of them. Any­way, I found a fair­ly nice cork­board at Hob­by Lob­by to put them all on. The cork is too thin on the board, but it’s oth­er­wise a nice one that can eas­i­ly be used for — well, any­thing else a cork­board can be used for — should the time come when I don’t want the clocks any­more. 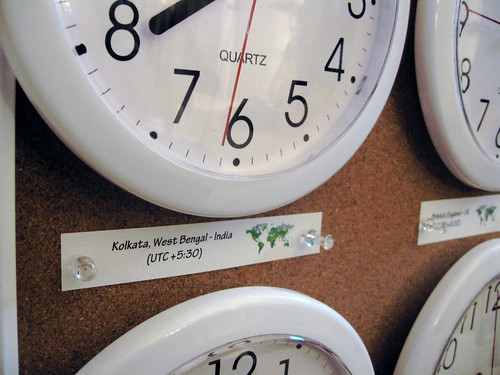 Close up detail of the tags. Time Zone high­light maps are tak­en from the Time & Date pref­er­ence pane from Mac OS X 10.5.

I men­tion not want­i­ng the clocks any­more for a good rea­son. You see, there’s one thing with cheap clocks. It’s not that they don’t keep decent time (they do okay). It’s that they’re noisy. Our office now has a con­stant “ka-chung-da-da-chunk, ka-chunk-da-da-chunk.” that is get­ting more than a lit­tle annoy­ing.

I knew that was going to be an issue all along, so we’ll see how long it takes to make me go mad. In the mean­time, at least I know that I can call Kolkata, India right now with­out wak­ing any­one up.

One thought on “It’s About Time”