In late Sep­tem­ber, Angela and I trav­eled along with our good friends Meg and Travis Tay­lor to vis­it two of the Hawai’ian Islands: Oahu and Hawai’i. Here’s a descrip­tion of some of the things we did and saw while there. You can also view two pho­to col­lec­tions at my Flickr site, one of Hawai’i as well as one of the plant-life there.

Day One: Getting There

One of these days, I’ll feel like we actu­al­ly were pre­pared by the time we left the house. Not so on this trip. Oh, we had bought sev­er­al books for the trip (one of which we left at home) and we made pack­ing lists. We even researched some of the less-beat­en paths we knew we’d be tak­ing while in Hawai’i, such as bring­ing cold-weath­er gear for the vol­canic peaks. How­ev­er, we still almost missed our flight due to wait­ing for the last minute to take care of things that could have been done ear­li­er. Well, at least we did­n’t for­get any­thing oth­er than our one book this time. 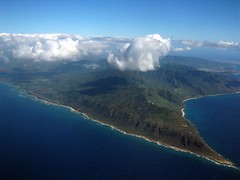 Fly­ing around Kae­na Point on the West­ern side of Oahu.

Our flight sched­ule had a lay-over in Cincin­nati Air­port (which is in Ken­tucky, odd­ly enough). In this, and the air­ports in Hawai’i, we would learn to appre­ci­ate the free WiFi at Rich­mond Inter­na­tion­al. Although we could­n’t do some of the en-route trav­el research we would have liked, we got a bite to eat and dis­cussed some of our plans for the week. The flight from North­ern Ken­tucky to Hawai’i is a long one, espe­cial­ly since over half of it is spent over the open ocean. Fur­ther, fly­ing ahead of the sun­set makes for one hell of a long day. How­ev­er, upon com­ing up to the island of Oahu, we had the chance to fly around the North Shore, Kae­na Point, Lee­ward coast, and Pearl Har­bor. That was a nice treat, which also gave us a great look onto some of the world’s most famous beach­es as well as Hawai’i’s remark­able terrain. 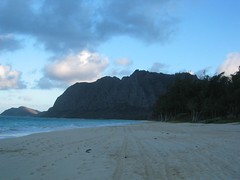 The beach along Waimana­lo Bay, just at the end of the block where we were staying.

After get­ting or lug­gage and pick­ing up our unre­mark­able Chrysler Sebring sedan, we made our way over to the rental house where we had a suite reserved for the next three nights. Of course, as a child who grew up in the moun­tains, the first thing I was inter­est­ed in was check­ing out the beach. For­tu­nate­ly, I did­n’t have beg one word to my three com­pan­ions. We walked to the end of the block and through the pub­lic beach access onto a stun­ning gold­en sand beach. Travis and I did some body surf­ing and splash­ing while Meg and Angela strolled along the shore. Lat­er that evening, we got some din­ner at a Thai restau­rant and picked up some gro­ceries in the near­by town. A local man wel­comed me to the island after notic­ing my total shock at a $6.50 gal­lon of milk. Yes folks, milk (and O.J.) is twice the price of gaso­line in the state of Hawai’i. It’s not that they don’t have cows, either. 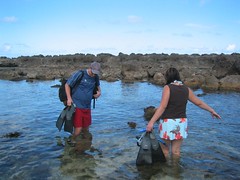 Snor­kel­ing at Shark’s Cove on the North Shore

The next day we decid­ed to head up to the North Shore and try some snor­kel­ing. We drove up the Wind­ward coast to Shark’s Cove and rent­ed four sets of snorkels, masks, and fins. Well, snor­kel­ing gained no new prac­ti­tion­ers that day in Meg and Angela. How­ev­er, Travis and I had a blast at it. We even came back after lunch at a road­side shrimp stand with Travis’ new­ly acquired under­wa­ter 35mm cam­era. We pho­tographed some fish and actu­al­ly got to swim around with a sea tur­tle for a few min­utes. Well worth get­ting in the water. Also at lunch, we vis­it­ed Mat­sumo­to’s gro­cery for the best shave ice in the entire world. Yes, David Williams is right, it is worth dri­ving across the island for. 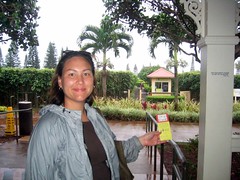 We drove as far West along the shore as the road would take us, just past Dilling­ham Air Field. We then took the high­way down the cen­ter of the island, through the end­less fields of pineap­ples. This was Dole coun­try, so we stopped in at the Dole plan­ta­tion vis­i­tors cen­ter. Although it was driz­zling rain, we decid­ed to take on the plan­ta­tion maze (the world’s largest). The goal is to find six lit­tle sta­tions hid­den in the maze and trace a small tem­plate onto your time­stamped card. Angela and I fin­ished in around 48 and Meg and Travis were right behind us. It was fun enough, but being dry might have made it even bet­ter. We made it back to the rental house, dried off, and went out to pick up some burg­ers at a bar near Hanau­ma Bay.

The fol­low­ing day brought us down to Hon­olu­lu and Waiki­ki Beach. Both are great, but not real­ly what we were in to. We all agreed to head up to Dia­mond Head, at which time the sky agreed to open up with rain. We then drove back down to Hon­olu­lu in search of rain gear, hik­ing shoes, and lunch. Lunch was found a Kore­an fast food place in the mall and some of the out­door gear needs were met at a local sports store. Of impor­tant note: Hon­olu­lu has some great stores, but not if you’re look­ing for out­door gear. Buy that stuff in Vir­ginia. Any­way, by the time we made it back to Dia­mond Head, the sun was out and we were in for a great hike up through a vol­canic crater turned mil­i­tary instal­la­tion turned state park. The view of Hon­olu­lu and Waiki­ki is absolute­ly worth the hike up the hill. On the way back to the rental house, we stopped for a short excur­sion along the high­way: to find the house where Mag­num P.I. was filmed. Travis and I are 99% sure that we locat­ed the home, based on a map we had. It’s not quite the man­sion it was made out to be, and is not in the best of shape, but it’s there all right. No Fer­rari any­where to be found, though. That night we head­ed back up the Wind­ward coast to a local bar for din­ner. I had a beer from the Kona brew­ery and we all sam­ple local seafood in some form or oth­er, all of which was very tasty.

The fol­low­ing morn­ing, we packed up for the flight that evening and head­ed back down to Hon­olu­lu for break­fast at Eggs ‘n Things. The only thing I can com­pare it to is Pan­cake Pantry in Hills­boro Vil­lage of Nashville. If you get that, you get it. Oth­er­wise, just imag­ine a real­ly great break­fast you’d be will­ing to stand in line for an hour or more for. Next, we made our way over to Pearl Har­bor to vis­it the U.S.S. Ari­zona Memo­r­i­al. We got our tick­ets and had a lit­tle over an hour free, so we also checked out the near­by U.S.S. Bowfin, a World War II era sub­ma­rine. Once again, the heav­ens opened up on us, but we made the most of it by pur­chas­ing some $1 pon­chos at the gift shop. Those got us back over to the line to board the ferry. 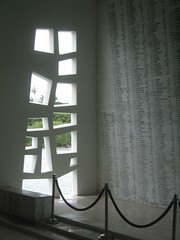 After a short NPS film (nar­rat­ed by Stockard Chan­ning), dur­ing which we sud­den­ly became very much aware of all the Japan­ese tourists in the room, we board­ed the fer­ry to take us to the memo­r­i­al. It is impor­tant to note that the sunken ship hull serves as the final bur­ial place for the hun­dreds of crew­men that died on board. Also, of the sur­vivors of the attack, some of whom had passed away just ear­li­er this year, many have cho­sen to have their remains brought back to be interred with their ship­mates. To me, that was prob­a­bly the most mov­ing part of the expe­ri­ence: wit­ness­ing sailors who, after so many years, still felt such a strong bond to their ship­mates as to want to spend eter­ni­ty back at the scene of what must sure­ly be the great­est tragedy of their lives.

We returned our car and made it back to the air­port in time to sit for a while and wait for our flight to the Big Island.