I’ll spare you all the “sor­ry I’ve not blogged in a while…” stuff and skip straight to the expla­na­tion of why I’ve been occu­pied with oth­er things. As some of you have seen on Flickr, we’ve been in the process of work­ing on our kitchen. It’s some­thing that we (and by that, I mean 90% Angela) have been want­i­ng to do for the past few years now. How­ev­er, going with­out a kitchen and work­ing des­per­ate­ly to get it back over the past few weeks has essen­tial­ly sucked the life out of me. I mean, left me com­pete­ly devoid of emo­tions oth­er than rage and self-pity.

In short: kitchen ren­o­va­tions real­ly suck, espe­cial­ly when you are try­ing to do a lot of it yourself.

I’m extreme­ly hap­py with how every­thing has come togeth­er. We still need to paint, but of course, we need to paint over half the rooms in the house. How­ev­er, the new coun­ters, floors, and appli­ances look great and Angela seems very pleased with them. 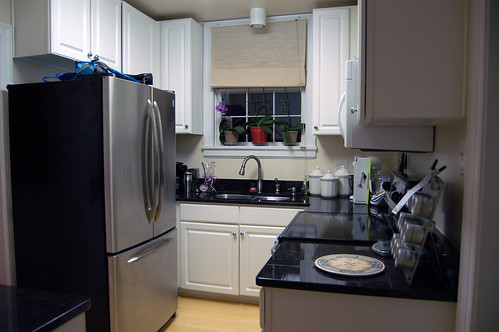 Not entire­ly done, but you get an idea of what the new kitchen looks like.

This is good, because I have begged her to not speak of or even hint at mov­ing for at least the rest of the year. Were the room larg­er, I would sleep in our “new” kitchen. After get­ting cut, burned, and shocked1 all in the process of work­ing on it, I feel a cer­tain sense of own­er­ship that does­n’t come from just pay­ing peo­ple to do things for you (although we did pay an elec­tri­cian and a plumber to do some of the work way out of my league). It’s not so much as pride in my work (as it’s not the great­est, by far) but more like the pride of fatherhood.

Yes, that will seem like a stu­pid state­ment in about five more months but for right now, I dare any­one to come between my new kitchen and me; let alone threat­en to harm it. I’ll bite you.