This is going to be one of those fair­ly long arti­cles, so if you want the short ‘n skin­ny, here it is: the inter­net kind of sucks these days, and yet I con­tin­ue to use it. I’m doing my best to get what I want out of it with as much as time as I feel I can spare for it, but I’m kind of bummed about it all the same.

I’ve been feel­ing a lit­tle depressed about the inter­net, par­tic­u­lar­ly “Web 2.0” (unless your some web design­er who thinks that phrase only means AJAX and using the word “beta”). What’s real­ly odd, is I’ve noticed a lot of oth­er peo­ple throw­ing up com­plaints and white flags sur­round some of the same issues. Tim O’Reil­ly gets a lot of flack for basi­cal­ly ask­ing us to take respon­si­bil­i­ty and be civ­il (I’d like to write more on that in the near future as I have time). Last week, Jason Kot­tke writes a short note com­plain­ing about a lot of oth­er blog­gers as well. I’ve noticed some decline in the activ­i­ty of a lot of my friends and con­tacts as well. It’s start­ing to seem like the inter­net isn’t what a lot of us thought it could be – what it real­ly should be. These instances, even when tak­en togeth­er, don’t exact­ly rep­re­sent any clear pat­tern. It’s just that they are sim­i­lar to a lot of what I’ve been feel­ing about my online-life.

I have spent a lot of my time online using Newsvine, a col­lab­o­ra­tive news site. I had a lot of hope for this site as it allowed me to feed my news-junkie per­son­al­i­ty with con­ver­sa­tions on top­ics of inter­est. The pop­u­la­tion that inhab­its that site are gen­er­al­ly more civ­il than a lot of the inter­net, although that’s a decid­ed­ly low hur­dle to clear. How­ev­er, after about six­teen months of spend­ing time surf­ing for news there, adding sto­ries of inter­est to me, cross-post­ing some news-relat­ed items from this site, com­ment­ing on the links and sto­ries by oth­ers; two prob­lems arose:

Hav­ing those two things become clear­er and clear­er, I final­ly decid­ed just to more-or-less stop my activ­i­ty on the site. I am much more inter­est­ed in hav­ing my online accounts (Newsvine, Flickr, del.icio.us, YouTube, etc.) be exten­sions of this site than replace­ments for it. This is my online plat­form and that means some­thing to me. Also, I sim­ply don’t have the ener­gy to be on the defense all the time. I have my own news fil­ters set up to get the news I’m inter­est­ed in and many of those places have their own audiences.

I’m not sure if there’s a real-world anal­o­gy to this, but as I love analo­gies, I’m going to try. I’ve nev­er been one to be a reg­u­lar at any giv­en bar or restau­rant. When I want Sushi, I go to the sushi place I think has the best stuff I’m in the mood for. When I want cof­fee, I go to a cof­fee shop. When I want a burg­er, I have plen­ty of places near me to choose from. When at the sushi place, I can dis­cuss how good that food is with peo­ple who prob­a­bly like sushi and not have to argue that sushi is the best food or worth the price, etc. How­ev­er, in gen­er­al, I just make my own meals at home and their gen­er­al­ly always what I want, just when I want them.

I did, how­ev­er, final­ly earn enough on Newsvine to get a check cut and sent to me. Now, I hope it’s obvi­ous but just to add to pret­ty much every­one out there who says the same thing: this is not a good way to earn a liv­ing. I haven’t real­ly run any seri­ous num­bers or sta­tis­tics, but I can tell you I made an aver­age of 3.33¢ per arti­cle seed­ed1 or writ­ten by myself (the arti­cles I wrote got rough­ly the same com­ments and votes as seeds, on aver­age). You can do the math, but the num­ber of arti­cles you’d need to write (or most­ly seed) per hour at that rate to even make the equiv­a­lent of min­i­mum wage is obscene.2 I don’t think that any­one there has any illu­sion of replac­ing their day jobs but I’m here to say, your time there had bet­ter be for fun because it’s not an effec­tive way to earn mon­ey.3 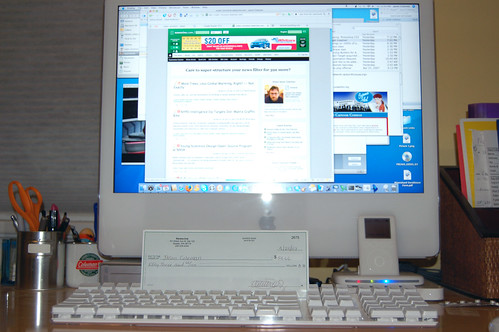 I’ve yet to write home about this.

Also, it seemed fit­ting for me to donate some of this mon­ey, as it was basi­cal­ly earned by me just link­ing to some­one else’s hard work. A lot of what I con­tributed to Newsvine was in news and infor­ma­tion regard­ing cli­mate change. Clear­ly, this isn’t an area of my exper­tise but I learned a great deal from some of the great resources on the sci­ence behind it found online. Par­tic­u­lar­ly, Real Cli­mate (a cli­ma­tol­ogy blog writ­ten by sev­er­al lead­ing sci­en­tists in that field) was source of infor­ma­tion I used a lot. One of the researchers in the field who has been very high pro­file due to the (most­ly made up) con­tro­ver­sy sur­round­ing his research­ing to pale­o­cli­mate and cli­mate prox­ies is Michael Mann of Penn State Uni­ver­si­ty (for­mer­ly at the Univ. of Vir­ginia). I decid­ed to donate the entire whop­ping amount of $53.66 to the Dept. of Mete­o­rol­o­gy at Penn State for this4.

I enjoy check­ing out the lat­est trends, I just don’t feel a need to con­tin­ue them just because their trendy. Some­times, I real­ly enjoy them and stick with them. Like, Flickr, for exam­ple. I don’t claim to be respon­si­ble for its pop­u­lar­i­ty, even among the peo­ple I know. How­ev­er, I was the first per­son I know who was using it. I con­tin­ue to use it because I enjoy it. I can tie it into this site very well and a lot peo­ple I know are there as well, hope­ful­ly also get­ting some enjoy­ment out of it.

Not too long ago, Twit­ter real­ly got a lot of atten­tion and some of my close friends were also excit­ed about it. I’ve tried it and hon­est­ly, I just can’t get excit­ed at all about it. There seem to be two dif­fer­ent styles of using the ser­vice, one is the just-write-what-you’re-doing and the oth­er is to use it as some sort of mass-IM sys­tem. I quick­ly real­ized that much of what I’m doing is either so reg­u­lar or so odd as to not be worth typ­ing about each day (“I’m eat­ing a sand­wich I made for lunch” or “I’m stressed out about how to fit enough rein­forc­ing steel into an 8” thick shear wall for seis­mic load­ing”). Appar­ent­ly, I’m right as that stuff did­n’t gen­er­ate much in the way of discussion.

The con­ver­sa­tion part just was­n’t some­thing I got into, either, and I don’t real­ly know why. I fig­ure I have phones, Skype, e‑mail, com­ment fields, actu­al IM, and such for that sort of thing that work far bet­ter, in my opin­ion (although, I should note they remain silent, in gen­er­al). I’m not say­ing this is a bad way of using Twit­ter at all, although it does­n’t appear to be the orig­i­nal inten­tion of the site’s cre­ators. As a mat­ter of fact, if you’ve got a group of peo­ple who often col­lab­o­rate or just hang out, it seems to be an excel­lent use for the site. Despite some peo­ple I know there using it for just that, I have yet to make use of it that way for myself.

I still check in to Twit­ter once or twice a day just to see what my friends are up to or say­ing as I real­ly want to keep up with them (and these are some of the peo­ple who seem reluc­tant to blog about it).

Is This Thing On?

The one place I’ve been most inter­est­ed in has been the least active: the longer con­ver­sa­tions. Of the peo­ple I fol­low online, many of them seem to be writ­ing less and less. This is even true for you peo­ple who I actu­al­ly know. It’s an awful feel­ing to be writ­ing stuff and get no response. No feed­back to know that any­one cares or even read it. It’s like talk­ing or per­form­ing for an audi­ence that has their backs turned because they just don’t care. At least, that’s what it can feel like, any­way; regard­less of reality.

I know that most of the peo­ple who do read this site just read it and go on. If what I write applies to them or they have some­thing to add, they’ll leave a com­ment but most of the time that’s just not the case. It’s a blog right? Blogs are for read­ing. Par­tic­i­pa­tion is some­thing we do else­where. I feel that way all too often, but I’m try­ing to change.

I want to apol­o­gize to those of you who wrote some inter­est­ing list on you site and I did­n’t echo it with my own. Those memes may seem a bit sil­ly, but they are often very inter­est­ing. Also, I’m try­ing to be more active on your sites as well. I don’t want to make oth­ers feel like they should only lurk and the best thing I know to do is to par­tic­i­pate myself. If some­one writes some­thing inter­est­ing, pro­found, fun­ny, or pro­vok­ing, I want them to know how much I appre­ci­at­ed it. I’ve always been some­one who needs to work hard­er at par­tic­i­pat­ing in the rela­tion­ships with my friends and fam­i­ly. This is a good way to do just that. Fur­ther, it was one of the stat­ed pur­pos­es of me ever hav­ing a site to begin with.

I hope that peo­ple will feel inter­est­ing in com­ing here. You’re the peo­ple I think about every­day – won­der­ing what you’re up to or what you’d have to say about some­thing that’s going on. I hope that you’ll appre­ci­ate my let­ting you know what I’m doing and you’ll let me in on what you think as well. I’ll even give Twit­ter anoth­er chance if that’s where my friends are, because where they are is what’s important.

The occa­sion­al response will be much appreciated.