I had a remark­able 241 com­ment spam items caught by Akismet this morn­ing. So far, Akismet has missed only about two or three items and only had one false pos­i­tive that I know of. Pret­ty remark­able since it has caught over 1,600 com­ment spam messeges since I first installed it. How­ev­er, I don’t the patience to wade through 200+ messeges to search for false pos­tives, so if you left a com­ment but it did­n’t appear right away, just e‑mail me and I’ll try and get it restored (or, just stop men­tioned Via­gra in your com­ments and always leave an e‑mail and sin­gle web site url). 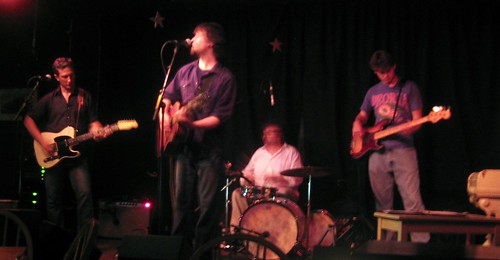 Dave rocks out on his twangy Tele­cast­er while play­ing for Stephen Sim­mons, who was in Ash­land, VA last Fri­day night. That’s Paul on drums and Willie on bass.

My younger broth­er Dave was in town Fri­day to play a show up at the Ash­land Cof­fee & Tea house with Stephen Sim­mons. We had a good time at the show and I learned that the Rich­mond area has at least one decent place to go lis­ten to music (I’ve so far been less than impressed, as you can tell).

That night, he and drum­mer Paul Grif­fith stayed at our house. Paul was in dire need of some wifi, so we hooked him up in order to try and make some pub­li­ca­tion dead­lines he had. The next morn­ing, Dave joined me and Angela at the train­ing team for our Sat­ur­day long run. After­words, it was Smooth­ie King (our lat­est addic­tion) and some show­ers. We took the guys out to lunch at a local joint we’d been want­i­ng to try our­selves and every­one seemed to agree it was well worth it.

We wish that Dave and the rest of the band could have stayed even longer, but it was off to North Car­oli­na for anoth­er show that evening. We’ll look for­ward to hav­ing some more bands trav­el­ing through to lis­ten to and hang out with.