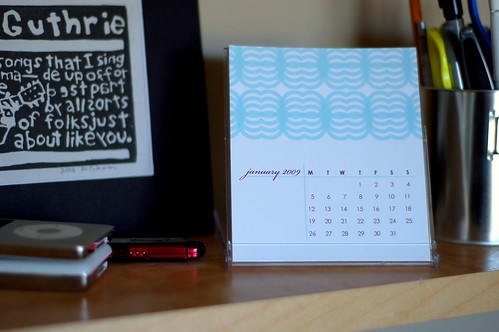 Over the years, I’ve decid­ed that set­ting for goals is a bet­ter notion that res­o­lu­tions. A res­o­lu­tion is some­thing that, once you’ve broke it there seems lit­tle point in keep­ing it from then on. They are so all-or-noth­ing. A goal is some­thing to keep striv­ing for. Even if you don’t reach it, at least you’ve made some progress. So, with that in mind, here are some goals I’m set­ting forth for Two Thou­sand Nine (in no par­tic­u­lar order):

I think the com­mon­al­i­ty here is that these all are just using my time bet­ter to get more out of my inter­ac­tions with those around me and those who I want to keep in touch with. Con­sid­er it lessons learned from 2008, I sup­pose. It was a tough year and one that drained me of the will to reach out to oth­ers. We’re in a much bet­ter place in life now and I have a lot less bag­gage caus­ing men­tal fatigue.

So, wish me luck and if you post some res­o­lu­tions or goals of your own, let me know.