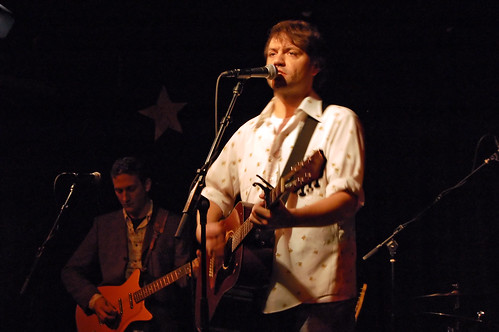 The Coal Men were sup­posed to be play­ing in Ash­land tomor­row night (the fourth), but as things hap­pened, that show fell through. How­ev­er, Tues­day before last, Dave called me up to let me know he’d be in town with Stephen Sim­mons to play a show on the 27th. I real­ly enjoyed Stephen’s show last time and this time even more so, since I had been lis­ten­ing to a cou­ple of his albums and knew the music. I tried to take a bunch of pho­tos, but I still real­ly suck at low-light stuff. The best of them made it to Flickr. Speak­ing of pho­tograph­ing live music, if you haven’t seen Scot­t’s pho­tos of Mojave 5 from that same week­end, you should check them out. I’m going to have to hit him up for some advice.